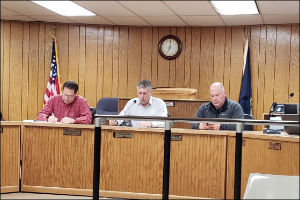 The Council confirmed the appointments Tyler Craig as a Patrol Officer and Joseph Pliler and Taylor Gopher as Probationary Officers with the Havre Police Department.

A change in an ordinance regarding the Council meeting schedule was unanimously passed on first reading. This would require the Council to host an agenda meeting just once per month, rather than the two meetings per month that is currently in the code. This ordinance will go through a second reading at the next Council meeting.

Before the meeting adjourned, Mayor Tim Solomon provided an update on the city’s response to COVID-19 concerns. He said the library and community pool are currently closed, and that the city has cut down on some of its staff in order to keep employees apart as much as they can. Those staff members will be on paid leave.

The Streets and Sidewalks Committee meeting that was supposed to follow the council meeting was canceled to due COVID-19 concerns.

The City Council will next meet on April 6.