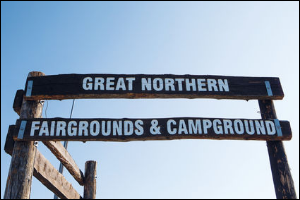 English told New Media Broadcasters that he believes Sivertsen has consistently undermined his work as Fair Manager. English says that among other things, Sivertsen cut the wires and took the plug-ins off the air conditioning condenser on the work pick-up despite an ongoing heatwave, shut employees in a horse stall in a livestock barn, shot gophers and pigeons on multiple occasions on the Fairgrounds with a .22 rifle, and poured oil under the bleachers as a way to try and control mosquitoes.

Anita Stevenson is the Secretary for the Fair Board. She says she was one of the people, along with 18-year-old groundskeeper Allee Bartlett, that Sivertsen locked in a stall, and provided this narrative of events:

It was Sunday before Fair, Frank had asked us to go and clean out the horse stalls because they need to be done for 4-H coming in on Sunday evening for setup. So (Bartlett) and I headed over there, we each took a horse stall, we started scooping it out onto the concrete. And that’s when Bob Sivertsen came over and started yelling at us and telling us to stop. We said, ‘No. We’re doing what we’re asked.’ That is when he shut my door to the stall I was in. And he held it shut. And I yelled at him and kicked it open and I told him not to do that again or I was going to call HR. So I started scooping out again and he shut it again. Whereupon I pushed it open, stepped outside, and I called HR. While I was on the phone with her, he did the same thing to Allee. Allee started screaming, whereupon (another employee) and HR asked me what the commotion was. I explained to her that Bob now had Allee shut in the stall and wasn’t letting her out. She instructed me to make sure that we had to go get Frank, and if it still continues, to contact her back. So I had James (Logan), who was also a groundskeeper who had just shown up, I had him go locate Frank and bring him over. When Frank got there, he called (the employee) back straight away. And it was at that time that Bob let Allee out of the stall.

Bartlett said she remains upset that there have been no significant repercussions for Sivertsen following the indiscretions.

He did not have any reason to shut us into the stall. There was none, we were doing our job. I personally knew that I could handle it, but in the moment it was like ‘how am I going to get out if this dude doesn’t let me out?’ It did go through my mind what’s going to happen if he doesn’t let me leave.

Josh Heitzenroder has been the Chair of the Fair Board since April and said he believes Sivertsen has good intentions despite his alleged actions.

Unfortunately, he doesn’t understand. He’s of a different generation. He’s convinced he was just closing the door to keep the girls from throwing manure into the alleyway. I wasn’t there. I don’t know what happened. His story is he was trying to stop them from throwing manure into the alleyway that he had spent probably close to a month cleaning that barn out. So as far as that goes, had the Manager been doing his job and keeping the stalls, making sure the stallers were keeping their stalls cleaned, it wouldn’t have been an issue in the first place…Whether he locked them in or he closed the door, that’s up to interpretation. I don’t know. I was not there. All I can go off is, I’ve heard from both sides of it, and I don’t agree with what he has done. But I’m not a lawyer and I’m not a County HR Agent. I don’t know how to handle this.

James Logan was a groundskeeper at the Fairgrounds from early June through last Friday. He says he quit due to constant micromanagement by Sivertsen. He also confirmed the allegations that Sivertsen cut the wiring on the air conditioning, locked employees in a horse stall, used a rifle to shoot gophers and pigeons, and poured used motor oil under the bleachers.

(Sivertsen) was just a control guy. That’s all I felt. Just anything he would say was just the opposite of what needed to be done, or to show that I’m on the Board and I’m in charge, I think that was his attitude.

According to Logan, Sivertsen left a note on the vehicle that said “A/C disconnected, do not hook up.” Logan says Sivertsen believed that having A/C was a waste of fuel. He says with no air conditioning, using the work pickup truck in the extreme heat became a difficult task.

When it comes to the rifle accusation, Logan says shell casings were found on the Fairgrounds, including near the bathroom in the RV park, and some of the shots were fired at pigeons inside the Bigger Better Barn.

“He had told me, he had shot like 14 pigeons and got four of them,” Logan said about one of his conversations with Sivertsen about his use of a rifle on the Fairgrounds. “He had the doors open inside the Bigger Better Barn, he shot four pigeons and the rest flew out the doors.”

Stevenson said she had fielded several complaints from people who had witnessed Sivertsen discharging his rifle.

Logan says Sivertsen used oil as a means to control mosquitos, and that he first noticed the oil when weed eating.

“I guess he thought he was going to kill the weeds. We have weed-killer there, we have a sprayer truck, we have the stuff to do it with. Why he thought he’d have to use oil is beyond me.”

Several of the sources, including Stevenson, also provided details on another incident involving Sivertsen during a fireworks display on July 4th.

Myself and my husband, along with Allee (Bartlett) and James (Logan), we were all helping put out fires and stuff like that as they were happening on the Fairgrounds. My husband was helping Allee, he drove the four wheeler and was pointing out to her where she needed to put water. So while he was trying to do that with her and show her what to do, Bob tried to stop him from assisting her. It was while there was an active fire on the scene…My husband just told him ‘get away. We have a job to do, and you’re stopping us.’ So he ignored Bob.

English, who has been the Fair Manager since June 2019, says he wanted to put these allegations on the record because he believes the public has a right to know what is going on. He says that no one has reprimanded Sivertsen for his actions, but if these incidents continue to happen, he will go straight to the Sheriff’s office to file potential charges.

Bob Sivertsen was appointed to the Fair Board by the County Commission in April. His term is set to expire in 2024. The Board has seen lots of turnover in the last few years, with Board members stepping down regularly, often for undisclosed reasons. In fact, there are currently three open positions on the Board.

“Most of this Board is new now, so they are probably overwhelmed with the situation,” Stevensson said. “And I get that. But they have to understand that having somebody like Bob is not an asset at this point.”

When reached by New Media Broadcasters by phone, Sivertsen provided the following statement:

I’m not going to respond. When they file a lawsuit against me, then I’ll have my day in court.

Sivertsen has been a known figure in the Havre area for decades. He served in the State Legislature from 1974-1982 and is the long-time President of the Highway 2 Association, which has lobbied for the expansion of US 2 to four lanes along the Hi-Line. He is an inductee of the Montana Cowboy Hall of Fame and has served as an auctioneer at various local events throughout the decades. Recently, he has also attempted to lead boycotts against the Hutterite Community.

Hill County Commissioner Mark Peterson, who played a large part in appointing Sivertsen to the Fair Board, declined to comment on the allegations when reached by phone.

Note: Members of the Fair Board are volunteers. Sivertsen has stated at recent Fair Board meetings that he has donated hundreds of volunteer hours at the Fairgrounds over the last few months, and his alleged actions impacted both volunteers and paid county employees, including groundskeepers and the Fair Manager.