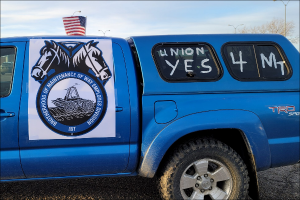 HAVRE, Mont. (NMB) – More than 30 vehicles paraded through Havre on Friday evening in a show of support for unions as controversial legislation, including a ‘Right-to-Work’ bill, makes its way through Helena.

Lindsey Ratliff is the Vice President of the Havre Education Association, a Havre City Council member, and a member of the Hill County Democrats. She came up with the idea of holding a parade and is worried the impacts potential legislation could have on Havre.

“It’s scary, especially for a union town like Havre that was built on union jobs. If you take away unions, you take away the Havre economy. And I think that we just need to remind everybody, as well as those in Helena, that Havre is a union town.”

Ratliff added that she believes the ‘Right-to-Work’ term is misleading.

“Anybody can choose to be in a union. You’re not forced to be in a union. Especially with the Janus Supreme Court decision a couple years ago, that took away our representation fee. So essentially anybody can have a job in Montana and not have to pay a representation fee, which means they don’t have to pay anything. Yet the union still negotiates on their behalf, they support them when they need it in the workplace. And the right to work is incredibly misleading. That term does not at all really describe what right to work would mean for Montana. Right to work basically means right to get paid less for doing more work with less benefits and less rights.”

Allen Woodwick is a bus driver for Havre Public Schools and a union member. Before that, he worked on the railroad in Havre and was a teamster. He says the benefits unions have provided him throughout his adult life have been crucial.

“Of course the wages are quite a bit more, the working conditions. And over the years, that’s where we got the five day work week, a lot of your child labor laws. The vacations, sick leaves, things like that. That came from the unions. It wasn’t just on the generosity of the corporations that we worked for, so that’s one of the big things. You look, for example, some of the bus drivers. The union bus drivers make roughly twice as much per hour as the non union bus drivers. And you also have the protections and the representation and negotiations for the contracts.”

HB 251, which would have implemented right-to-work laws in Montana, was defeated on second reading Tuesday on the House Floor by a vote of 38-62.