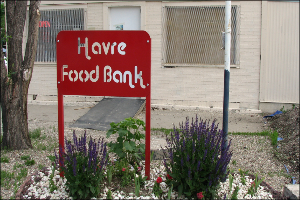 HAVRE, Mont. (NMB) – The Havre Firefighters annual Everyone Loves a Firefighter (E.L.F.) food drive is scheduled for next week, with some major changes due to COVID-19.

Vice President of the 601 Firefighters Union Cody McLain says the drive, which will take place from October 19th-22nd, will be completely contactless.

“We’re dividing the town up into four different sections. We won’t be going door-to-door this year like we have been in the past. This year we’re just going to have residents of the community put food out for us. When the food is out, we’ll come pick it up.”

People can also drop donations off at the food bank during those hours.

The food drive usually brings in between 6,000-12,000 pounds of donations each year.

“The generosity of the community is overwhelming,” McLain says. “When we get those years where we get over 12,000 pounds of food, it’s crazy. It’s pretty awesome. So this year is going to be a little more difficult to do that with the pandemic going on, but we’re hoping if we can get the word out on time we can get the community to rally together. Of course with the pandemic going on, the food bank is in a little bit more dire need than normal also. So we’re hoping people can have their food ready for us and we can have the food drive done and collect that 10,000 pound goal.”

The items the Havre Food Bank says they are in the most need of right now are macaroni and cheese/pasta, canned goods, cereal, and flour and sugar. But they are more than happy to accept all food donations.