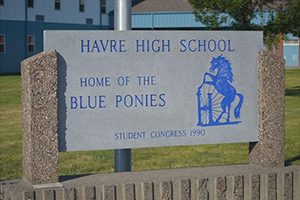 HAVRE, Mont. (NMB) – The Havre School Board convened on Tuesday afternoon for their monthly special meeting and unanimously approved putting a project out for bid to resurface the track at Havre Middle School.

The track has seen significant deterioration in recent years, and the chosen bidder will be tasked with removing and disposing of the existing track surface, cleaning the asphalt base, pre-leveling and filling all cracks, and supplying and installing a weather resistant track surface.

A previous estimate placed the cost of this project at over $430,000 for a non-draining track. However, Superintendent Craig Mueller says they could save some money by making the straightaways 10 lanes and having the other portions be eight lanes, which is consistent with many other schools in the state.

Bid opening will occur on Wednesday, July 13th at 1 PM at the Robins Administrative Building.

Also at the meeting, the Board approved the additional High School course offerings of Welding III and Ag Plant/Animal Science.

Before the meeting adjourned, Mueller and the Board provided an update on ongoing negotiations between the District and the Havre Education Association.

Although the current agreement doesn’t expire until June 30th, 2023, the sides agreed last year to a Memorandum of Understanding to discuss compensation and working conditions.

Although several items have been agreed upon, including a six percent increase to the District’s contribution for insurance, there are more than a handful of aspects of the agreement that continue to be worked out. The latest package proposal rejected by the HEA, according to the District, included a 3.25 percent increase on base pay for the upcoming school year. HEA’s salary request began at 15 percent of an increase on the base pay but is currently at 9.5 percent.

Bargaining with teamsters and paraprofessionals are also coming months.

Three meetings have been held so far, and another is scheduled for July 6th.