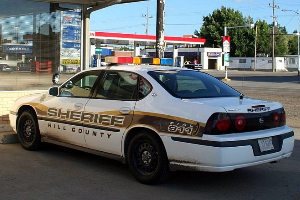 HAVRE, Mont. (NMB) – A Box Elder man was arrested after absconding from Probation and Parole and leading officers on a pursuit through the Havre area. Hill County Sheriff Jamie Ross says that 35-year old Franklin T. Caplette is currently being held in the Hill County Detention Center on charges of obstructing a peace officer, possession of dangerous drugs, and on a Federal probation hold.

At about 7:30 Tuesday evening, the Rocky Boy Police Department advised the Hill County Sheriff’s Office to be on the lookout for a white 2007 Ford F-150, that Caplette was believed to be in. An hour later, Deputies located the vehicle and stopped it near Washington Avenue and 14th Street West, but the vehicle sped off, prompting a pursuit. Deputies lost sight of the vehicle, but it was located a short time later on Havre’s northside after it crashed into a house. The occupants of the residence were uninjured and the suspects fled on foot.

Caplette was arrested without incident and two other suspects have been identified, but remain at large.

There is no immediate danger to the public.