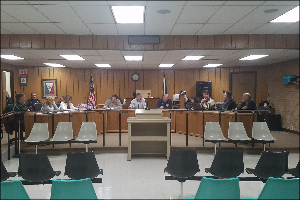 The Council only had a few agenda items, but discussed possibly changing their meeting schedule to one meeting per month, plus another monthly working meeting for the committees. They could still call another meeting later in the month, but Mayor Tim Solomon believes they could accomplish more this way and hopefully get the public more involved. Some council members agreed and the Ordinance Committee said they would look into the issue more closely. The Committee will meet again after the next meeting on December 16th.

Some councilmembers will also meet with Public Works Director Dave Peterson in January to further discuss Special Improvement Districts. They will map out some potential SID areas and costs, and plan to have meetings with those landowners to gauge their interest.

The Council approved another contractor payment for the Bullhook Storm Drain Project for over $155,000. Peterson said they are at the end of the project and mostly have clean-up work left to complete.

They also approved the Mayor’s appointments to the Airport Board and the Havre Historic Preservation Board.