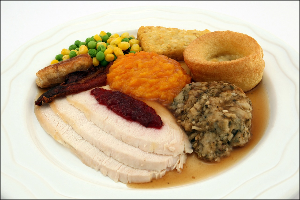 HAVRE, Mont. (NMB) – The numbers are in from this years free will Havre Community Thanksgiving Dinner.

Organizer Debi Rhines says over 800 meals were served, including nearly 500 via delivery.

Rhines says volunteer numbers were down from previous years, but those that showed up provided more than enough support.

“Everybody had a task to do. We didn’t have anybody feeling like they weren’t being useful. And that’s always a fear when you’re dealing with some years we’ve had 150-200 volunteers. This year everybody worked and had a task, so it was good.”

Although Rhines says the to-go meal system worked well, the hope is that next Thanksgiving, people will have the option to have a sit down meal.

“The ultimate goal is to not do it like this again. We really want to be together. And I think that’s why some of the numbers are down. So many people come for fellowship. And fellowship is a big part of the mission statement of the meal. Coming together. Young, old, rich, poor. Everybody is in the same dining room and we are all serving each other that spirit of Thanksgiving.”

The dinner is funded annually by “The Anonymous Donor.” It was not held in 2020 due to the pandemic.