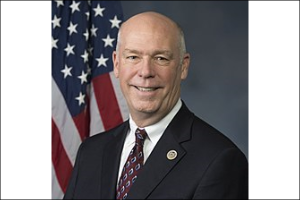 “Montanans sent a really clear message to Helena. That it’s time for Helena to change the way it does business. We need to get our economy going, get Montanans back to work. We’ve hit the ground running. We’ve got a real mandate from Montanans. We’ve been working on putting our team together.”

Gianforte has already announced several transition-advisory teams that will help him select leaders for various Departments, such as Fish, Wildlife and Parks.

“There are 10 of these nominating committees made up of folks that have domain expertise in the area where we’re looking for candidates. So we’re in a period where we’re casting a really broad net, soliciting people that want to serve the people of Montana. We’ll vet that list in December and make our selections.”

He says the public should expect announcements on “initial hires” over the next few days, and should expect noticeable differences in the way state agencies are run.

“First you have to figure out who is in charge, then you need to figure our what they need to do,” said Gianforte, quoting Jim Collins’ book ‘Good to Great.’ “So we’ve hit the ground running. We’re going to make selections for FWP and the other agencies hopefully here in December. We’ve been thrilled with the response we’ve gotten.”

Gianforte says one of his priorities that could benefit residents of the Hi-Line is providing more value-added agriculture in Montana.

“I look forward to creating public-private partnerships to help that happen so our producers get a fair price for their hard labor. Trades education is (also) incredibly important. I think we should be working to bring manufacturing back onshore from China. We have an initiative, part of the Comeback Plan is focused on trades education, to make it easier for employers to help employees get the skills they need to get good paying jobs here in Montana. We’ve also worked on infrastructure-related issues.”

Gianforte has assembled his own COVID-19 task force, with their first meeting having taken place shortly after his interview with New Media Broadcasters.

Gianforte says he wants to everyone’s voice to be heard before making any decisions.

“I have small business owners, I have local leaders, I’ve got teachers, there’s medical professionals, tribal and our faith community represented on this COVID task force. So the first question I’m asking today of the group is ‘what are we doing well right now, what is not working, and thirdly, what should we do differently.’ We’ll collect that input. I get the reins to the state of Montana on January 4th. We’ll be ready to roll out our plan at that time. I’ve been clear. I think we need to keep people safe. By then, we should have vaccines in the state, which is going to really help our frontline healthcare workers and elderly who are more sucseptible to more severe symptoms. So we’ll need to use the facts and the input from this group and the science to make the best decision.”

Throughout the pandemic, Gianforte has advocated for personal responsibility rather than mandates.

Gianforte says he will leave the decision on whether to hold the upcoming legislative session remotely up to the legislators, but he believes they should meet in person.

“My input is A: we’ve been elected to do the business of the people. We need to meet. I think it’s very difficult to do that if you’re not face to face. But secondly, and just as important, we need to ensure the safety of legislators and the staff in that process. And there are reasonable precautions we need to take to make sure that we can meet safely and get the people’s business done.”

Outgoing Governor Steve Bullock recently released a proposed budget for the state for fiscal years 2022 and 2023. Bullock has said his proposal would not raise taxes or cutting services from government programs.

However, passing a budget for those fiscal years won’t happen until the upcoming legislative session, and Gianforte says it will look much different.

“I appreciate that input. We’re going to have our own budget. I’ll release it early in January. That’s really the task. And our budget is going to focus on implementing the Montana Comeback Plan that I campaigned on. That’s the mandate we’ve been given by the people of Montana. So we’ll have our own budget, and I look forward to sharing the details with you.

A majority of Montana voters approved the legalization of recreational marijuana in the General Election. There has been talk of legislators attempting to repeal the initiative during the upcoming session, but Gianforte says the voters have spoken.

“As a legislature, working together with our administration, we need to implement the will of the people. So I would not be supportive of repealing that, given that the people have spoken.”