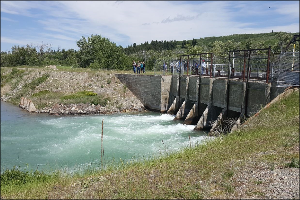 WASHINGTON D.C. (NMB) – Montana’s U.S. Senators, Democrat Jon Tester and Republican Steve Daines, are urging the Senate Committee on Energy and Natural Resources (ENR) to conduct a hearing on the St. Mary’s Reinvestment Act, which, if approved, would provide $52 million for the rehabilitation of the Dam and headworks of the system that provides water for the Milk River valley.

In the letter sent by Tester and Daines to ENR Chair Senator Joe Manchin (D-WV) and Ranking Member Senator John Barrasso (R-WY), Montana’s Senators urge for the bill to undergo a markup.

The Senator’s state that the complete rehabilitation of the System is expected to cost over $200 million, so this legislation would build on the $100 million provided in the bipartisan infrastructure bill.

The bill would also change the cost share based on the results of an ability-to-pay study that is being finalized. Currently, users of the system pay 74 percent of costs for rehabilitation, with the exception of funds from the aforementioned infrastructure bill.

The ENR’s Subcommittee on Water and Power held a hearing on the bill back in May, but that has been the latest action to date regarding this legislation.